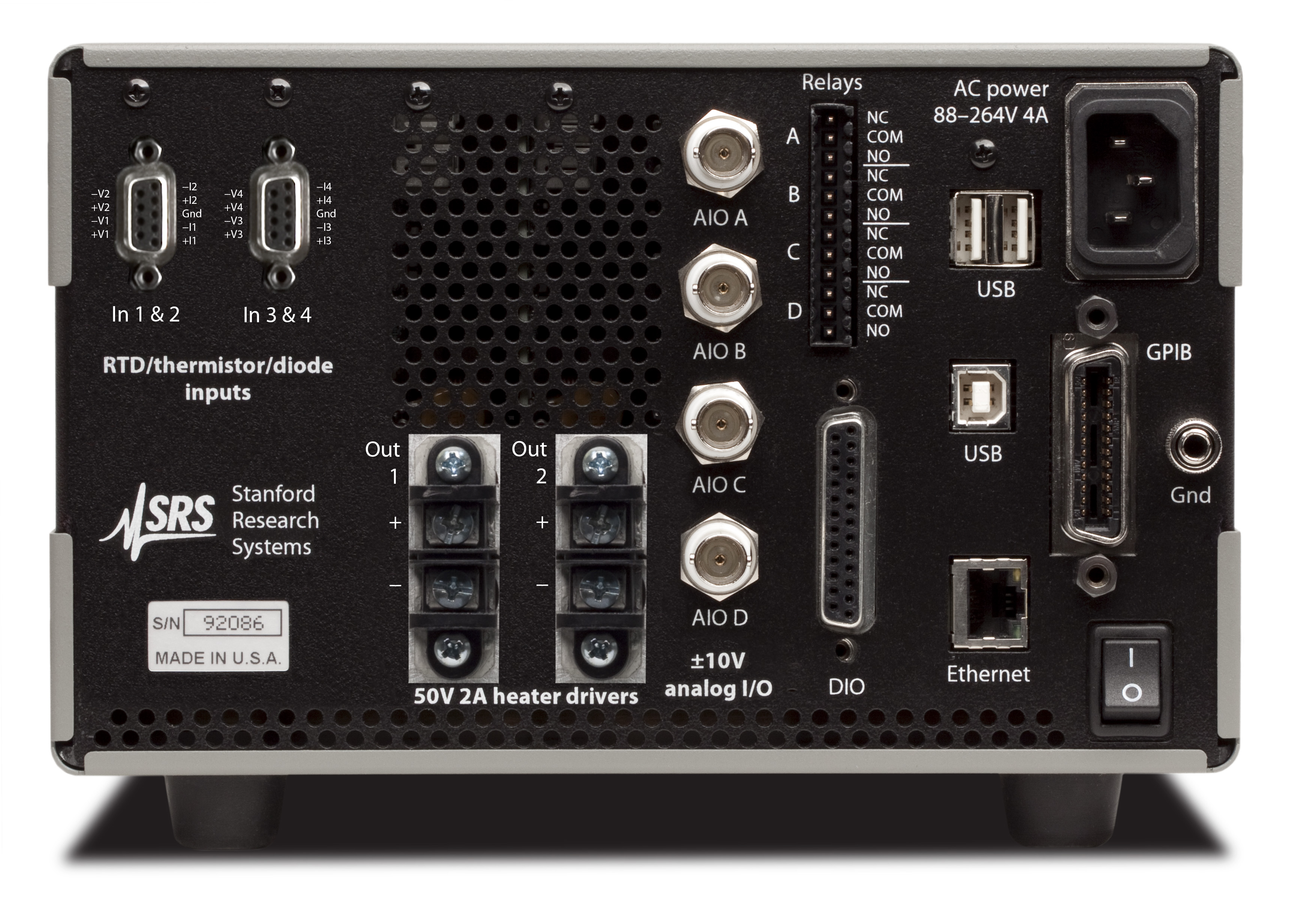 The CTC100 offers four temperature inputs that can read RTDs, thermistors, and diodes. Each temperature input channel has its own with eleven input ranges, and is equipped with its own independent excitation current source.

Standard calibration curves for a variety of sensors are included, and custom calibration curves of up to 400 points each can be entered. Each sensor input has high and low level or rate-of-change alarms. Sensor inputs can be lowpass-filtered to reduce noise, and/or differenced with another channel.

The CTC100 has two heater outputs that can each deliver up to 100 W of power to a 25 Ω heater. In addition, four analog voltage I/O channels can be used to drive heaters with the help of an external amplifier.

With up to six feedback control loops available, the CTC100 can provide precise temperature control of each of its heater outputs by continually adjusting the heater power. Any of the CTC100's channels can be selected as the input for each feedback loop. Feedback time constants can be adjusted between 200 ms and 10 hrs.

Up to ten sets of PID parameters can be stored for each channel. Setpoints can be ramped at a fixed rate.

The CTC100 comes with four general-purpose ±10 V voltage I/O channels read by a . It also has eight digital I/O channels that can interact with user programs.

Four 5 A relays can be used for process control. Three virtual channels, not connected to any physical input, allow calculated values (such as the difference between two channels, or a value calculated by a user program) to be displayed, graphed, and logged.

The CTC100's color LCD display can show any combination of temperature measurements and heater outputs on graphs or numeric displays. Up to eight channels can be plotted either on a single graph with a common Y axis, or on separate graphs with independent Y axis. Touchscreen operation makes the instrument versatile and easy to use.

Data logged to USB devices can be transferred to a computer by plugging the USB device into a PC. A Windows applications can be downloaded from SRS website to graph CTC100 log files.

Each of the CTC100's front-panel controls has a corresponding text command that can be sent over USB, Ethernet, and either or an optional GPIB interface.

When the USB interface is used, the CTC100 appears on the computer as a standard COM port and can be controlled by any software that is compatible with an .

User programs (macros), consisting of one or more remote commands, can be uploaded to the CTC100. This is done by either sending them through one of the communications ports or by saving them as text files on a USB memory device and then plugging the device into the CTC100. Program macros can also be entered and edited from the front panel.