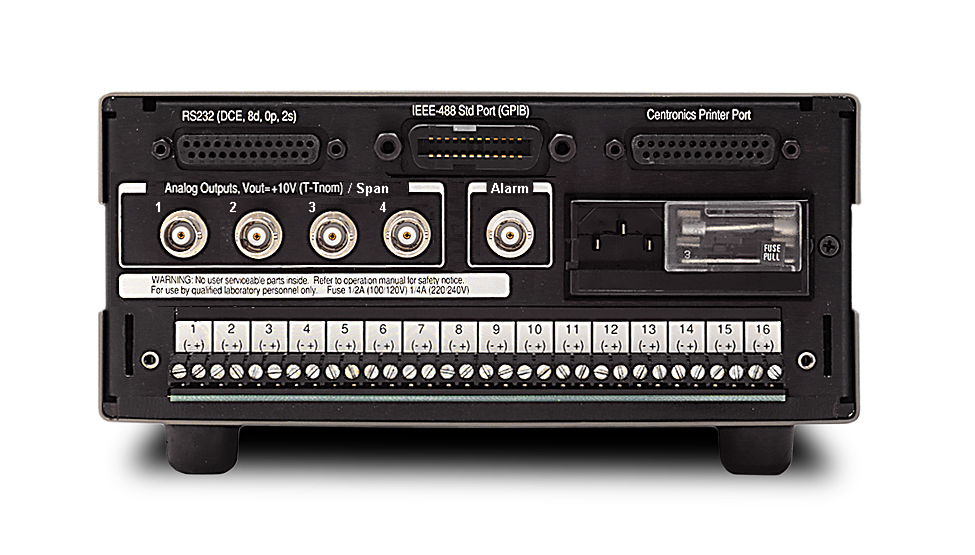 The SR630 is a 16-channel thermocouple monitor designed to read, scan, print and log temperatures or voltages. You can use any one of seven standard thermocouple types to read temperatures from -200 °C to +170 °C. For remote monitoring applications, the SR630 can time-stamp and store up to 2000 readings in non-volatile memory for later analysis.

Temperature readings from the SR630 can be viewed on the front panel or queried via the instrument's standard or GPIB interfaces. In addition, the standard Centronics printer port provides convenient hardcopy output in either tabular or .

The SR630 can also be configured as a DC voltmeter with full-scale ranges from 30 mV to 100 V (1 mV resolution). As a voltmeter, the unit has 0.05 % accuracy and 1 µV input offset drift. Each channel can be set independently to monitor either temperature or voltage, giving the SR630 even more flexibility in your application. outputs are also available to provide a voltage proportional to the temperature of the first four input channels. The voltage outputs can be used to drive recorders or to control external instrumentation.

Sixteen screw-terminal inputs are mounted on a rear-panel isothermal block for cold junction compensation. The isolated differential inputs have a 250 V breakdown level, allowing the SR630 to tackle difficult applications such as temperature profiling of electrically live equipment. Each of the 16 channels may be independently set to display in units of °C, °F, K, mV or V. Similarly, thermocouple type, nominal temperature, temperature limit, and alarms may be uniquely set for each channel, providing complete flexibility in the configuration of the instrument. Access to any channel parameter is provided through the front panel or via the computer interfaces. The SR630 can store up to nine entire instrument configurations including thermocouple type and temperature limits for all 16 channels.

There are four analog outputs that are proportional to the readings on channels one through four. Both the slope (m) and offset (b) of the equation, , are changed by setting the nominal temperature and chart span for the corresponding channel. X is either temperature or voltage, depending on the setting for each channel.

You may use the analog outputs to drive chart recorders or they can provide a feedback signal for proportional temperature control systems. They may also be used as fixed-level, analog control signals (set via the computer interfaces).

Each channel can be programmed individually with an upper and lower temperature limit. An audio alarm and a relay closure indicate when any channel exceeds its preset temperature or voltage limits. The front-panel LED display will indicate which channel has exceeded its limit.

An internal, battery backed-up clock/calendar is used to time-stamp temperature readings. The SR630 can be set to scan, time-stamp, and record data on up to 16 channels at intervals from 10 to 9999 seconds. Data is either sent immediately to the printer, or stored in the internal 2,000 point buffer for output at a later time (via GPIB ).

The SR630 can also function as a 1:15 analog multiplexer. Any of the first 15 input channels can be switched out to channel 16 and passed on to other instruments. This feature is useful in ATE systems and many other monitoring applications.